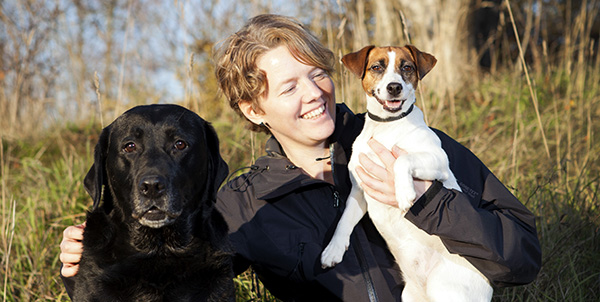 To coordinate research is more or less equivalent to creating order within chaos. Cecilia Johansson makes sure that things goes smoothly within the research group and the Domestic Animals unit.

Knowledge about genetic diseases in animals offers the opportunity to understand how diseases function in humans. The research group that Cecilia Johansson works in specializes in using dog as a comparative model for human disease. In addition to cancer the group also studies autoimmune, cardiac, and neurological diseases. The knowledge they gather can later on be translated to human patients.

− We use the dog as a model for human disease by identifying genetic risk factors in the dog and then proceed to investigate if the same genes and pathways cause similar disease in humans. The knowledge gained can in the future provide information for diagnosis and treatment options for both dogs and humans.

Cecilia Johansson took a different path after her PhD than most. Instead of pursuing her own research she chose to become a project coordinator for a research group.

− It is still a somewhat unusual position, but I think that it is becoming more and more common for people who want to work in a creative research environment but not focus on their own personal project.

Her role within the research group is to facilitate coordination of meetings, reports funding applications and planning of research projects. She believes that it is a career path that many are not aware of.

− It is incredibly rewarding to be in such an inspiring environment. You get to be a part of frontline research, attend seminars and such, but do not have to strive to promote your own research. Also, I get to be a part of many projects instead of a single one, and I am able to participate in a lot of different things.

Cecilia Johansson splits her time between coordinating the research group and managing a SciLifeLab unit. As a manager for the Domestic Animals unit she handles requests from people who are interested in using domestic animal models in their research.

− I mediate contact between those who wants to use domestic animals in their research and our network of veterinarians, geneticists, agronomists and biologists. In collaboration with SLU we also have a large Biobank with canine blood and tissue samples.

Although Cecilia Johansson works with domestic animals she doesn’t have any pets herself. She spends her spare time with her family or outdoors, mostly on a jogging track in the forest.

Connection to SciLifeLab: Unit manager at the Domestic animals unit.

Leisure activities/hobbies: Hiking in the forest and spending time with her family.

What you didn’t know about Cecilia Johansson: She is hard to beat at Ruzzle.