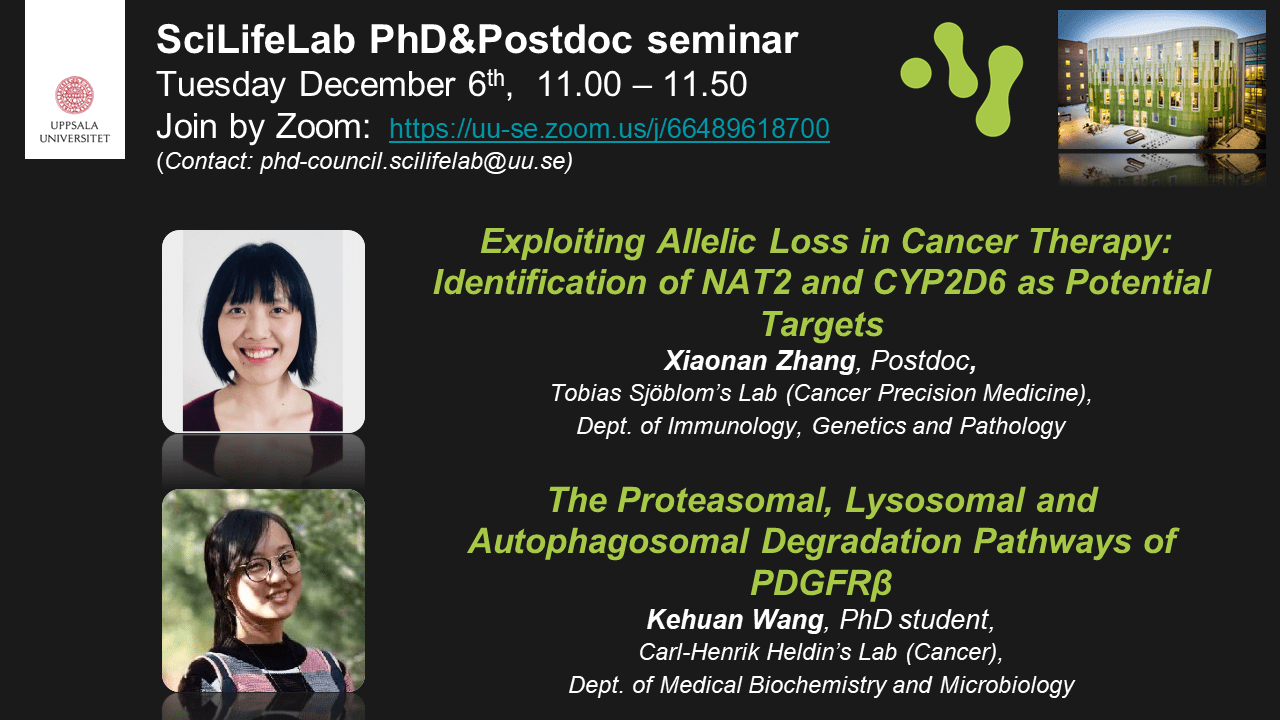 Welcome back to the SciLifeLab Uppsala PhD&Postdoc seminar series!

For this occasion the speakers will be:

Loss of heterozygosity (LOH) is observed in >90% of human cancers and results in the loss of allelic variation in thousands of genes. LOH thus creates genetic differences between tumor and normal cells, particularly at gene loci where the individual is heterozygous for a wildtype and a loss-of-function (LoF) allele. We have sought to identify genes with common LoF polymorphisms where tumor cells that have lost the gene activity can be targeted by low-molecular-weight drugs or other means. We previously reported that recurring LOH at the NAT2 locus at 8p22 in colorectal cancers (CRCs), and the ensuing loss of NAT2 enzyme activity, could be exploited for anticancer therapy. Recently, we discovered a group of ATPase inhibitors that exhibited specific toxicity to CRC cells with high NAT2 activity. In parallel, we investigated the CYP2D6 locus as the CYP2D6 enzyme metabolizes ~25% of clinically used drugs and frequently undergoes LOH in several tumor types. We have established liver cancer cell models and demonstrated that the activity of three anti-cancer compounds, used in clinic or in clinical trials, is dependent on CYP2D6. We anticipate that a subset of CRC and liver cancer patients with LOH events in NAT2 or CYP2D6 will benefit from this research.

Title: The Proteasomal, Lysosomal and Autophagosomal Degradation Pathways of PDGFRβ
Summary:
Platelet-derived growth factor (PDGF)-induced signaling via PDGF receptor β (PDGFRβ) leads to activation of downstream signaling pathways which regulate multiple cellular responses, such cell migration, proliferation and survival. Signaling via PDGFRβ is dependent on subcellular location of signaling molecules and hence the internalization of the receptor. It is not clear exactly how PDGFRβ is degraded, both endosomal/lysosomal and proteasomal degradation has been suggested. In this study, we have characterized the proteolytic cleavage of ligand-induced PDGFRβ and found that proteolytic cleavage of PDGFRβ resulted in two fragments. This cleavage is dependent on the internalization of PDGFRβ, which can be blocked by the treatment with bortezomib. Treatment with bortezomib resulted in increased phosphorylation of PDGFRβ and the down-stream signaling molecules PLCγ and STAT3, while phosphorylation of Erk1/2 MAPK was reduced and Akt was unaffected. We also investigated the possibility that PDGFRβ is degraded by selective autophagy in response to starvation or ligand-induced downregulation of receptor from the cell surface. We found that PDGFRβ accumulated in cells treated with bafilomycin A1 upon serum starvation which could be reversed by inhibition of protein synthesis with cycloheximide. Overexpression of LC3A, but not LC3B, promoted the formation of a complex between PDGFRβ and p62. Additionally, PDGFRβ interacted with LC3A and other members of LC3-like family, i.e. GABARAP and GABARAPL1. In conclusion, we speculate that the step-wise proteolytic cleavage of PDGFRβ may have functional consequences for signaling. Macroautophagy may not play a major role in ligand-induced downregulation of PDGFRβ but it could be involved in downregulation of PDGFRβ during starvation via targeting by p62 to non-conventional autophagic or proteasomal pathways that include LC3A and GABARAPs. The functional involvement of these pathways in the control of PDGFRβ levels remains to be further investigated.