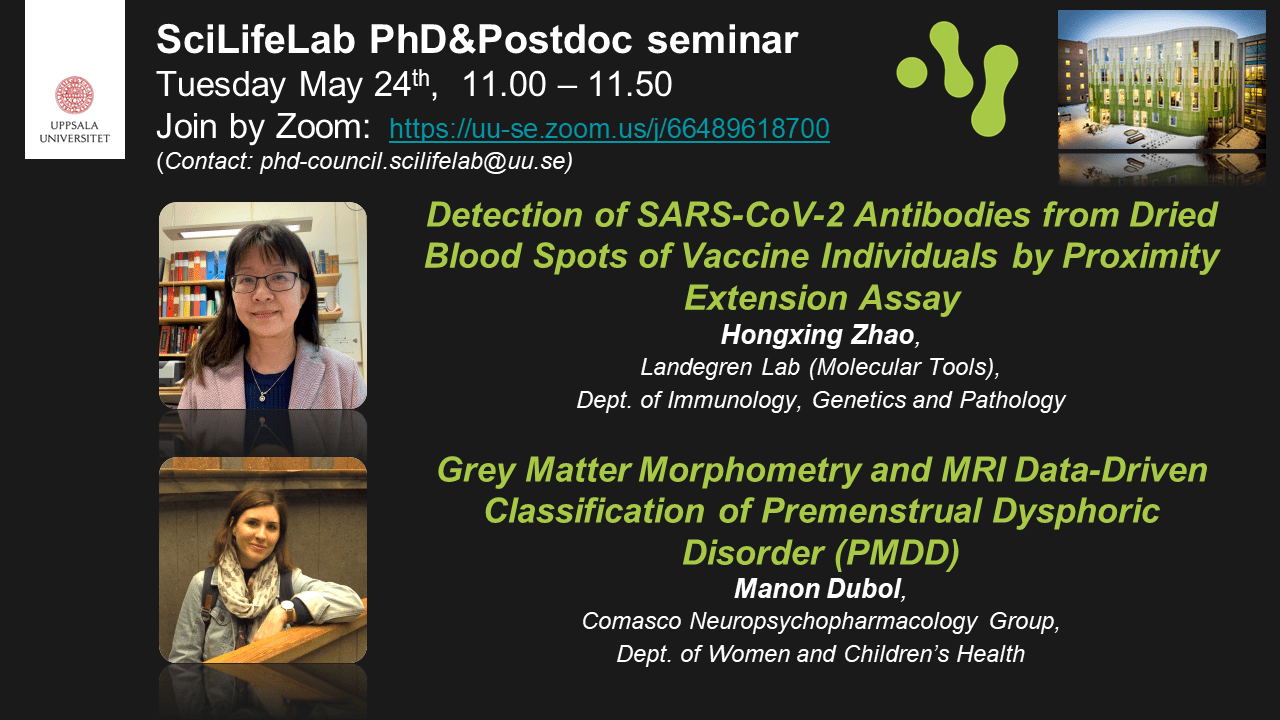 We are very happy to host exciting talks by PhD students and Postdocs from a great variety of fields within SciLifeLab.

Title: Detection of SARS-CoV-2 antibodies from dried blood spots of vaccine individuals by proximity extension assay
Summary: We have developed a solution-phase assay for sensitive detection of SARS-CoV-2 antibodies in serum or dried blood spots (DBS) from infected or vaccinated individuals. Detection probes were prepared by conjugating the recombinant S1-RBD or nucleocapsid (NC) to either of a pair of oligonucleotides. Upon incubation with COVID-19 patient serum or DBS from vaccinated individuals, the multivalency of the antibodies brings pairs of oligonucleotides that have been conjugated to the viral proteins in proximity. The oligonucleotides can then undergo enzymatic DNA extension via a proximity extension assay (PEA), and the resulting amplicons are sensitively detected by real-time PCR or end-point read out using ELISA mechine. This antibody PEA (AbPEA) test uses only 1 µl neat or diluted serum or one ø1.2 mm disc cut from a DBS. All 100 investigated sera and 21 DBS collected prior to the COVID-19 outbreak were negative, demonstrating a 100% specificity. The sensitivity of the assay for infected patient after 10 days symptom reached 99.8% [95% confidence interval: 0.9935-1]. Anti-S1 antibodies could be detected directly in punched-out discs from self-sampled DBS 11 days after vaccination, and it reached a maximum at 3 weeks after a first inoculation. Examination of a serially collected DBS from 14 individuals all showed similar trends of antibody responses after both a first and second vaccination, although antibody levels varied between individuals.

Title: Grey matter morphometry and MRI data-driven classification of premenstrual dysphoric disorder (PMDD)
Summary: Premenstrual dysphoric disorder (PMDD) is recognized in the DSM-5 as a hormone-related depressive disorder, specific to women’s mental health 1. Women who suffer from PMDD experience affective, cognitive, and physical symptoms that peak during the late luteal phase of the menstrual cycle, and remit shortly in the beginning of the next cycle 2. The key affective symptoms of PMDD point to anatomical and functional brain impairment, suggesting an impaired top-down inhibitory process involving limbic brain structures 3. However, very little is known about brain morphological alterations in PMDD. The present study aimed at investigating the grey matter structures that distinguish women with PMDD from healthy controls, by use of multiscale structural MRI analyses. Differences in grey matter structure between the groups were investigated by use of Voxel- and Surface Based Morphometry. Furthermore, machine learning and multivariate pattern analysis was performed using a leave-one-fold-out cross-validation procedure, to test whether MRI measures (volume, thickness, gyrification, sulcal depth and cortical complexity) could distinguish women with PMDD from healthy controls. The findings point to PMDD-specific grey matter structure in regions of corticolimbic networks, in line with the hypothesis of an impaired top-down inhibitory circuit involving limbic structures in PMDD. Furthermore, the results include widespread cortical regions and cerebellar areas, suggesting the involvement of distinct networks in PMDD pathophysiology. These effects prominently involved volumetric and cortical thickness measures, as further highlighted by multivariate pattern classification analyses. Such differences in brain structure may help explaining the variations in brain function previously reported in women with PMDD during the symptomatic phase.