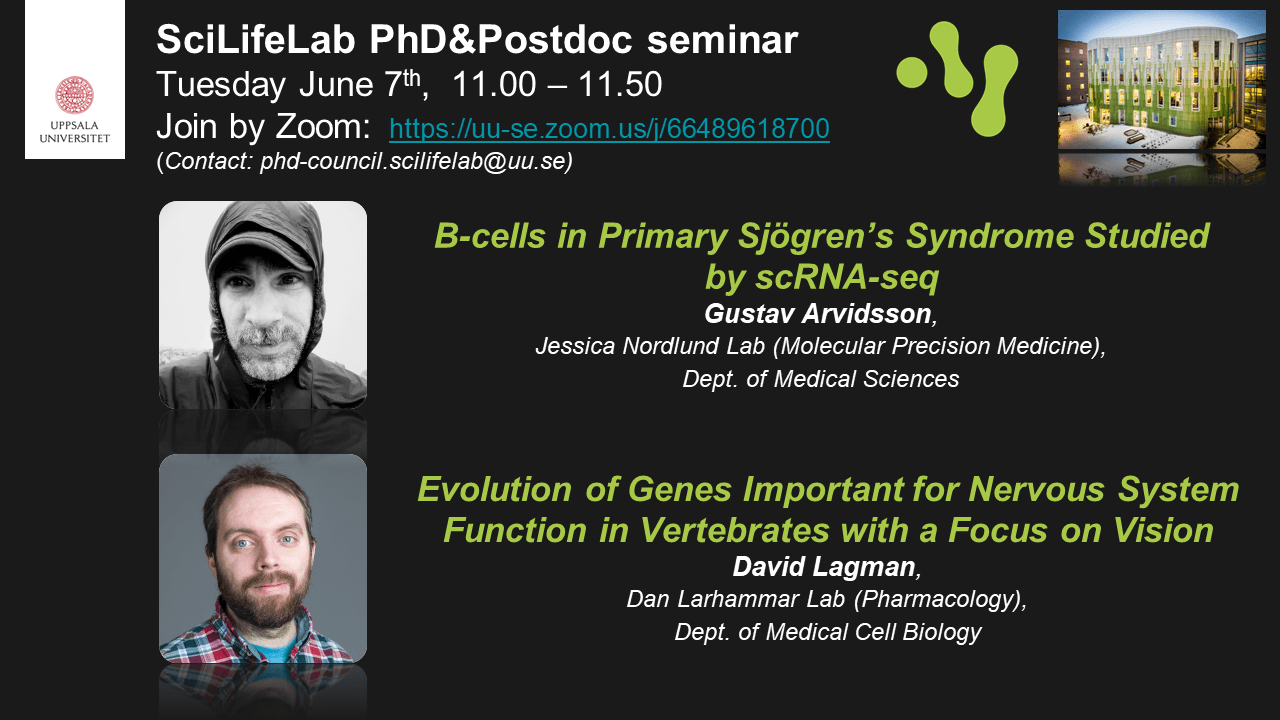 We are very happy to host exciting talks by PhD students and Postdocs from a great variety of fields within SciLifeLab.

Title: B-cells in primary Sjögren’s syndrome studied by scRNA-seq
Summary: Primary Sjögren’s syndrome (pSS) is an autoimmune disease where the main clinical indication is an increased lymphocyte infiltration to the salivary and lacrimal glands, leading to a dry mouth and dry eyes. Auto-antibodies to SSA or SSB are present in the majority of the cases and these can often be detected long before symptoms arise. The disease primarily affects middle aged women and while the disease manifestation is mild for most patients about a third develop more severe systemic symptoms and 5% of the patients develop B-cell lymphomas. Given the prominent role of B-cells in the onset and progression of pSS the present study aims to interrogate differences in B-cell subtype composition, clonotype distribution and gene expression differences between patient subgroups for different B-cell subtypes by means of scRNA-seq. For this purpose, we have generated gene expression and targeted B-cell receptor libraries for ~230 000 unique purified B-cells from 24 patients and healthy controls which we hope can broaden the understanding of the role of B-cells in pSS.

Title: Evolution of genes important for nervous system function in vertebrates with a focus on vision
Summary: Whole genome duplications (WGDs) at the base of the vertebrate lineage have over the years been shown to be responsible for the expansion of many gene families that are important in vertebrate central nervous system function. We have previously resolved the evolution of many of these genes in relation to these WGDs, especially those involved in neuronal, neuroendocrine, and visual function. Here, I will describe our latest results regarding the evolution of cyclic nucleotide gated cation (CNG) channel genes in metazoans. The CNG channels play an important role in vision in vertebrates by being responsible for the hypopolarization of cone and rod photoreceptor cells after the detection of light. Using extensive datamining we have managed to identify four previously unknown CNG channel genes in several invertebrate lineages. We have also managed to, through detailed analyses of conserved synteny, accurately assign vertebrate CNG genes to related chromosomal regions providing strong evidence for an expansion in the early vertebrate WGDs. These analyses open up the door for investigations into the function of the novel CNG genes identified in invertebrate genomes. Finally, I will describe our current endeavor into understanding the evolution of genes involved in long term memory formation and maintenance in vertebrates.